Aikido has been described as ‘moving Zen’ As with all Zen arts, although the final aim is personal transformation, the focus of the training hall is practical.
Hard work is required to master the fundamentals of movement, timing and breathing.

“This is not mere theory” O-Sensei, the founder of Aikido, said. “You must practice it.”

Practicing in partners, each working at his or her own level, students alternate as the attacker and the one who receives the attack. Learning to take falls safely is an important aspect of training. Whether executing the technique or taking a fall, the Aikidoka (合気道家) trains to blend with or capture the opponent’s energy and harmlessly redirect it.

Effectiveness in this art does not depend on size or strength. Men and women of all ages practice Aikido. When all the elements of an encounter are harmonized, it’s the attack that brings down the attacker.

The rewards of training include stamina, flexibility and improved muscle tone, but above all, training is ultimately an encounter with oneself. The student of Aikido seeks to identify and gain control of the ways in which he or she reacts to opposition, and so learn to remain centered under all conditions.

The monkey is reaching

For the moon in the water.

Until death overtakes him

He’ll never give up.

If he’d let go the branch and

Disappear in the deep pool,

The whole world would shine

Hakuin paints for us an elaborate picture. First, we have the moon. It is reflected in water. A monkey hangs from a branch above the water, and it yearns for the moon that it sees reflected in the water. The monkey continually reaches into the water to grasp the moon, but the prize eludes his grip.

Who is the monkey? Well, we are. Or, more specifically, it is the busy, grasping mind. It is that chattering, gibbering aspect of the awareness that we most often identify with.

The moon, as I have often pointed out, is a common representation in Zen poetry of enlightened awareness, ripened or full awareness.

So the monkey, the mind, is seeking enlightenment, though it fails to understand what it is really grasping at. It just notices something shiny, and it desires to possess it. It is not truly reaching for enlightenment; instead it grasps at a mere reflection of that light in the water below it.

What is this water? It can be understood as the world of manifest reality. It reflects the light of enlightenment. In fact, that is its purpose. But while it appears to be real, it is found to be fleeting, changing, ultimately intangible.

The monkey mind never tires of grasping at what shines and shimmers in reflection. This is partly because, in addition to the moon, the monkey sees itself reflected as well – and it loves its own face.

Hakuin laughs and gives us the solution: The monkey mind must let go and “disappear into the deep pool” of reality. The monkey’s fall represents the insight that the way is not attained through effort but through supreme yielding. When the mind stops grasping at reflections, when it fades into stillness, only then does the whole world shine “with dazzling pureness.” In other words, the mind can never grasp enlightenment. When it finally gives up and gets out of the way, then enlightenment is discovered to have already come about. 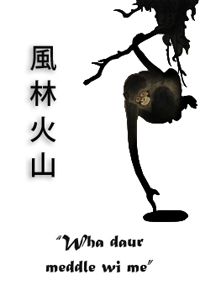